“It is not the critic who counts; not the man who points out how the strong man stumbles, or where the doer of deeds could have done them better. The credit belongs to the man who is actually in the arena, whose face is marred by dust and sweat and blood; who strives valiantly; who errs, and comes short again and again, because there is no effort without error and shortcoming; but who does actually strive to do the deeds; who knows the great enthusiasms, the great devotions; who spends himself in a worthy cause; who at the best knows in the end the triumph of high achievement, and who at the worst, if he fails, at least fails while daring greatly, so that his place shall never be with those cold and timid souls who know neither victory nor defeat.” — Theodore Roosevelt, “Citizenship in a Republic,” Address at the Sorbonne, Paris, France, April 23, 1910 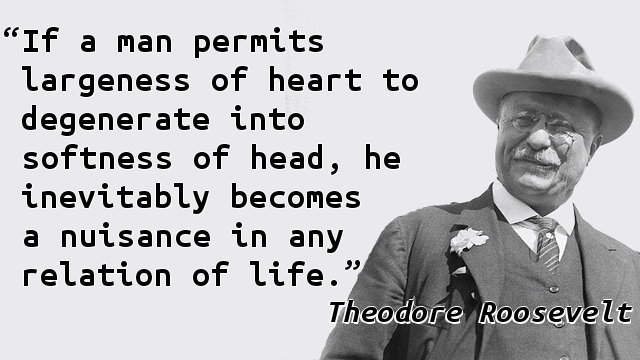 “If a man permits largeness of heart to degenerate into softness of head, he inevitably becomes a nuisance in any relation of life.” — Theodore Roosevelt, “Fellow-Feeling as a Political Factor“, Century, January, 1900

“Few things hurt a good cause more than the excesses of its nominal friends.” — Theodore Roosevelt 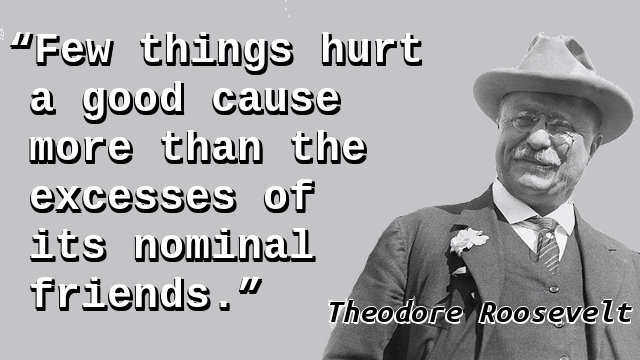 “Few things hurt a good cause more than the excesses of its nominal friends.” — Theodore Roosevelt, “Latitude and Longitude among Reformers“, Century, June, 1900

“In the proper sense opportunism should merely mean doing the best possible with actual conditions as they exist.” — Theodore Roosevelt, “Latitude and Longitude among Reformers“, Century, June, 1900 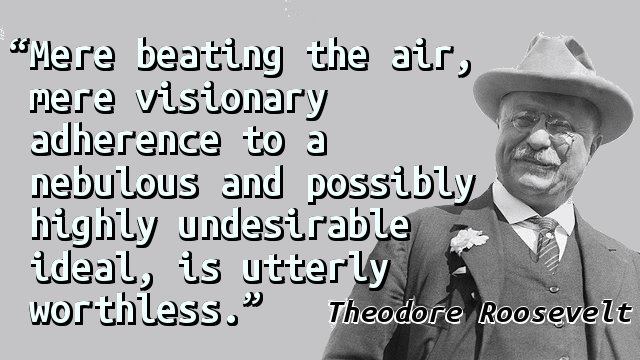 “Far better it is to dare mighty things, to win glorious triumphs, even though checkered by failure, than to rank with those poor spirits who neither enjoy much nor suffer much, because they live in that grey twilight that knows neither victory nor defeat.” — Theodore Roosevelt, “The Strenuous Life“, Speech before the Hamilton Club (1899-04-10)